In These Times – Toledo Passed a “Lake Erie Bill of Rights” To Protect Its Water. The State Is Trying to Stop It. 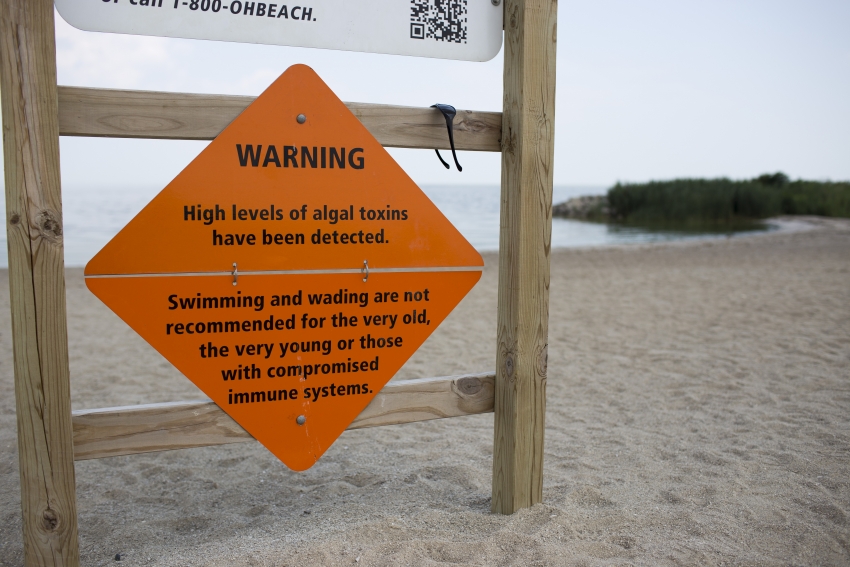 A local effort to protect environmental rights—of both people and nature—faces pushback from the state and industry.

For three days in 2014, the people of Toledo, Ohio, couldn’t drink the water. A massive blue-green algae bloom producing a toxin known as microcystin was poisoning Lake Erie, the city’s primary source of drinking water.

Algae blooms are increasingly common in Lake Erie, caused in large part by runoff from industrial factory farms and warming waters. Things have become so bad that there are now algae “forecasts” predicting how large the algae bloom will be each year. Large-scale toxic blooms are once again afflicting the lake, in summer 2019.

In the face of this growing crisis, and seeing little help coming from their state or federal representatives, residents of Toledo determined that they needed to take steps themselves.

A community coming together

Community members came together in 2016 to form Toledoans for Safe Water, a grassroots organization focused on protecting the lake and their drinking water. As they realized that conventional environmental laws were not going to be sufficient to protect the water, they decided to advance a new form of protection that secures environmental rights – of both people and nature. They drafted a new law, the Lake Erie Bill of Rights, to secure rights of the people to a healthy environment and of the lake itself. Despite $300,000 spent by BP in an opposition campaign, the law was approved by a citywide vote in February.

Toledoans for Safe Water worked with the Community Environmental Legal Defense Fund (CELDF), a non-profit organization that has assisted some of the first places in the world to develop rights of nature laws. (Co-author Mari Margil works for CELDF.)

Efforts to stop the expansion of rights

Like movements of the past, which focused on expanding rights, the people of Toledo are seeing their efforts met by a ready opposition. The Ohio legislature recently passed a budget bill that strips away the authority of community members to defend the rights of nature in court. And this spring, the state of Ohio also joined an industry lawsuit seeking to overturn the Lake Erie Bill of Rights. The litigation is ongoing.

Unfortunately, state-sponsored efforts to block the fight for more legal rights are all too common.

The history of the Civil Rights movement is rife with examples. This includes going after one of the most effective tools of civil rights activists: the boycott. By refusing to patronize segregated businesses, African Americans were able to demonstrate their economic necessity to communities, leading to many shops and lunch counters opening their doors to black customers. This includes the Montgomery Bus Boycott, which lasted 381 days when a federal court ordered the buses desegregated.

The full weight of the law was brought against Civil Rights activists, with injunctions and laws banning boycotts. Martin Luther King Jr. and other activists faced jail and intimidation based on such tactics.

Labor rights activists have faced similar pushback. Following a wave of worker strikes in 1945 and 1946, Congress passed the Taft-Hartley Act. The Act prohibited a number of union activities, including certain types of strikes, boycotts and picketing. Over time, Taft-Hartley has stymied advocacy for labor rights and better working conditions.

More recently, in the wake of the Standing Rock pipeline protests, legislation and executive orders have advanced in a number of states to restrict and criminalize such activities. Oklahoma’s legislature, anticipating protests against oil pipelines, recently enacted H.B. 1123. Among other things, the new law makes merely stepping onto a pipeline easement punishable by up to a year in prison. Similar legislation has advanced in Ohio.

No time to wait

History doesn’t tend to look kindly upon state-sponsored suppression of people’s movements. With over a million species on the brink of extinction, coral reefs bleaching and dying off, and the last five years the hottest on human record, we don’t have time to wait for history’s blessing.

The anti-boycott laws did not stop the Civil Rights movement, and the Ohio Legislature’s ban on rights of nature enforcement will not stop the movement to recognize rights of ecosystems. Following Ohio’s ban, Williams County, Ohio, residents submitted initiative petition signatures to ban corporate water privatization and recognize rights of the freshwater Michindoh Aquifer, pressing forward regardless of efforts to stop them. Communities in other states are advancing laws of their own, to join dozens of municipalities and native nations that have recognized rights of nature in the United States, as well as laws and court decisions recognizing rights of nature in other countries including Ecuador, Colombia, and Uganda. Together they are advancing critical change – what Colombia’s Constitutional Court described, in recognizing that the Atrato River possessed legal rights, a necessary “step forward in jurisprudence” that must occur before it is “too late.”