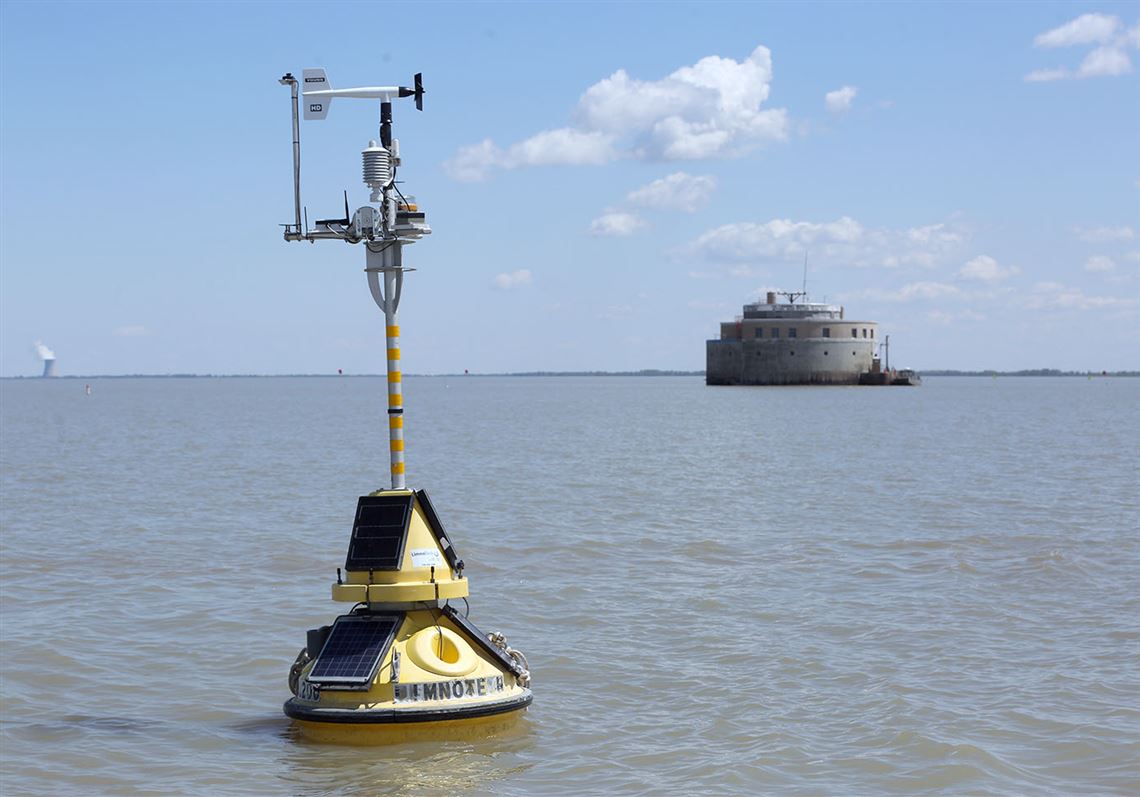 A buoy and the water intake for the City of Toledo are seen in Lake Erie. (The Blade)

COLUMBUS — The Ohio Senate on Tuesday put its first stamp on the state’s next two-year budget by calling for the investment of $172 million into the health of Lake Erie and other Ohio waterways while also maneuvering to make toothless a Lake Erie Bill of Rights approved by Toledo voters in February.

The Senate’s version of the next two-year budget also builds on the House’s across-the-board tax cuts for individuals while additionally restoring a number of tax breaks benefiting businesses. It also increases the slice of the revenue pie that automatically goes to local governments and public libraries.

A full chamber vote on the budget could come next week with a final budget due on Gov. Mike DeWine’s desk by June 30.

The state faces no financial crises this cycle and is expected to hear news later this month that the administration’s already rosy revenue numbers will be even rosier than expected.

So instead of trying to find places to cut, debate largely centers on how much more to spend on things such as K-12 schools, college financial aid, Lake Erie, the opioid crisis, and foster care.

The bill would fully fund a total of $172 million for the first two years of the new H2Ohio program aimed at investing in the long-term health of Lake Erie and other Ohio waterways. But it does not front-load the rest of the $900 million sought by Mr. DeWine for a full 10-year program.

“The governor put a $900 million price tag out there, but that was over 10 years,” said Sen. Matt Dolan (R., Chagrin Falls), finance committee chairman. “While I believe this body is fully supportive of H2Ohio … but H2Ohio is a brand new program. We want to work with the administration to roll out $170 million … to make sure it’s efficiently and effectively run.”

The Senate plan also would keep intact House language that effectively negates the Lake Erie Bill of Rights that Toledo voters approved in February. It preempts the possibility of the filing of litigation on behalf of the lake.

Markie Miller, a Toledoans for Safe Water organizer who on Earth Day spoke to a United Nations assembly about her efforts to get the Bill of Rights passed, said she is disappointed — but not deterred — by the latest maneuver.

She said the 11th hour budgetary tactic is “really disheartening” and another reason why voters lose faith in government.

“I think it’s kinda low and it’s disappointing to see that response. It’s certainly not deterring me or anyone in this group from pushing forward,” she said. “This has always been about letting the people decide. It’s hard for me to obediently recognize a law passed by a government that won’t recognize me.”

Ms. Miller said there’s no reason why the state couldn’t make the investment in H2Ohio and leave the Lake Erie Bill of Rights alone.

“It doesn’t have to be an either/or. It’s not like they can’t both exist,” she said.

The ballot measure approved by voters calls for Toledo’s city charter to be amended in such a way that declares Lake Erie itself has a right to carry a smaller environmental burden. The House added a provision to declare that nature or an ecosystem does not have legal standing to bring court action. The ballot issue is already being challenged in court.

Republican House leaders have argued the sort of legal action encouraged by granting the lake a ‘bill of rights’ would amount to frivolous lawsuits.

Both the House and Senate would spend about $8.5 billion a year for K-12 schools. Both essentially froze funding going into the formula that distributes money to schools while providing $550 million over the biennium for mental health, counseling, mentoring, after-school programs, and other initiatives targeting at-risk students.

The Senate plan takes $125 million in additional funds that the House would also have put into such programs and instead redirects that money toward fast-growing districts and school choice programs.

Lawmakers are also arguing over how much to send back to Ohioans via another round of tax cuts, who should benefit, and what should happen to a series of existing tax breaks for business at risk in the House plan.

“The state is doing very well fiscally,” Senate President Larry Obhof (R., Medina) said. “We have the opportunity to do both. We made significant investments across the board in this budget bill and, in fact, are pushing right up against the limits on what can legally be spent in the [general revenue fund].”

Yet to come are policy decisions not directly tied to funding that could end up being wrapped into the final product — such as yet another revision of high school graduation standards and backing away from state takeovers of academically struggling schools.

“After the last administration’s decade of cuts, I remain encouraged by the potential reinvestment we could see in this bill,” Senate Democratic leader Kenny Yuko (D., Richmond Heights) said. “The devil is in the details, but we are hopeful for progress aimed at improving the quality of life of all Ohioans.”

The $69 billion House budget, which passed last month with strong bipartisan support, would eliminate income taxes for those earning less than $22,250 a year and cut taxes for all other brackets by 6.6 percent. The Senate plan expands the latter across-the-board cut to 8 percent, implemented over two years.

But to partly offset its tax cuts, the House plan would reduce the amount of income small businesses could earn before paying income taxes from $250,000 to $100,000. The Senate restores that break to $250,000, but, beginning next year, would remove the 3 percent tax cap in current law on income above that.

The House would also have eliminated a series of tax breaks for such things as investment coin and precious metal bullion purchases and movie production. The Senate not only restores those two breaks but builds in the motion picture production credit.